Design of Parking-Garage Ventilation for Pollutant and Smoke Control

How the dual objectives of car-park ventilation can be met using computational fluid dynamics and a new-to-the-U.S. unducted alternative to traditional systems.

An enclosed parking garage—that is, a structure designed for automobile storage with openings along less than 40 percent of its perimeter—requires mechanical ventilation to control pollutants generated during normal operations and to remove smoke in the event of a fire. Though ducted systems traditionally have been utilized for these purposes, today’s computational tools facilitate the design of lower-cost unducted systems. This article will provide guidance on the use of computational methods for the design of unducted parking-garage ventilation systems that minimize both first and operating costs, dynamically manage the removal of pollutants, and, critically, are optimized for a range of fire scenarios.

Understanding the Need for Ventilation

Despite the trend toward electric vehicles, the overwhelming majority of automobiles on the road today use petroleum for fuel. Although internal-combustion engines burn cleaner than ever, they still emit carbon monoxide and oxides of nitrogen, which are harmful to human health and, thus, must be monitored and, when they rise above a predetermined level, controlled.

The primary concern of a parking-garage-ventilation-system designer, however, is the extraction of smoke in the event of a fire. The leading cause of death in any building fire is not the effects of heat or flame but, rather, smoke. When a fire develops in a space, smoke will rise from the fire and spread horizontally along the ceiling. When it cools, the smoke will fall from the ceiling, forming a barrier between any occupants and their means of egress.

Keeping means of egress clear of smoke long enough to permit evacuation—regardless of a fire’s location in the structure—requires the definition of a series of fire scenarios and the design of a system to handle them all. Think of it as a structured way of preparing for the worst.

The need to keep means of egress clear of smoke in the event of a fire is illustrated by Photo A. On Jan. 7, 2020, a diesel vehicle on the ground floor of the almost completely occupied 3,000-vehicle-capacity parking garage at Stavanger Airport in Sola, Norway, caught fire. The fire quickly spread and became so hot that an entire section of the five-story structure collapsed. There were said to be no reports of injuries.

Traditionally, smoke control is designed for the critical velocity of 10 fps (3 m/s). Thus, when designing a parking-garage ventilation system, we are looking to induce a flow of at least 10 fps (3 m/s) from the supply-air source to the extractor fans.

The supply-air source and the extractor fans are placed so that air, when flowing from one location to the other, always is moving away from means of egress. Thus, evacuees always are walking against the flow of air and away from the smoke created by a fire (Figure 1). 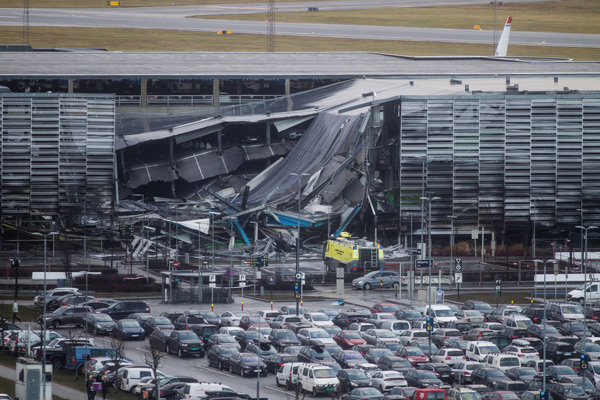 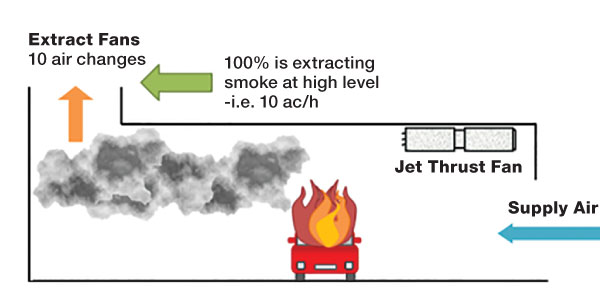 FIGURE 1. Strategically placed in a parking garage, jet fans ensure air moves from the supply point to extraction points at or above the critical velocity of smoke, 10 fps (3 m/s). This helps to ensure occupants have a smoke-free means of escape. Image courtesy of Woods Air Movement Ltd.

Around the world, standards for the design of parking-garage ventilation systems can vary significantly. In the United States, the 2021 International Mechanical Code (IMC) establishes minimum requirements using prescriptive and performance-related provisions. The IMC was developed with broad-based principles that make possible the use of new materials, methods, and designs.

2015 ASHRAE Handbook—HVAC Applications (Section 15.19) constitutes a fundamentally different approach to parking-garage-ventilation-system design. The IMC design approach is to apply a fixed multiplier to either parking-garage floor area or volume such that, if the floor area or volume doubles, the required ventilation doubles. The ASHRAE Handbook design approach is based on a calculation taking into account estimated traffic and average automobile emissions. Both design approaches must fulfill requirements for removing pollutants and, in the event of a fire, smoke and hot air.

In North America, the jet fan, a technology long accepted globally as a cost-effective alternative to traditional ducted parking-garage ventilation, is gaining traction.

With a jet-fan system, strategically placed arrays of jet fans direct supply air from air-supply points toward extraction points, ventilating all parts of the parking garage in the process. Supply air can be delivered in a number of ways: via vehicle entrance or exit ramps, fresh-air openings (grilles), or supply-air fans.

A key advantage of jet fans is that they can be positioned between building structural elements. By not requiring ductwork, they lower height requirements and allow for easier maintenance. 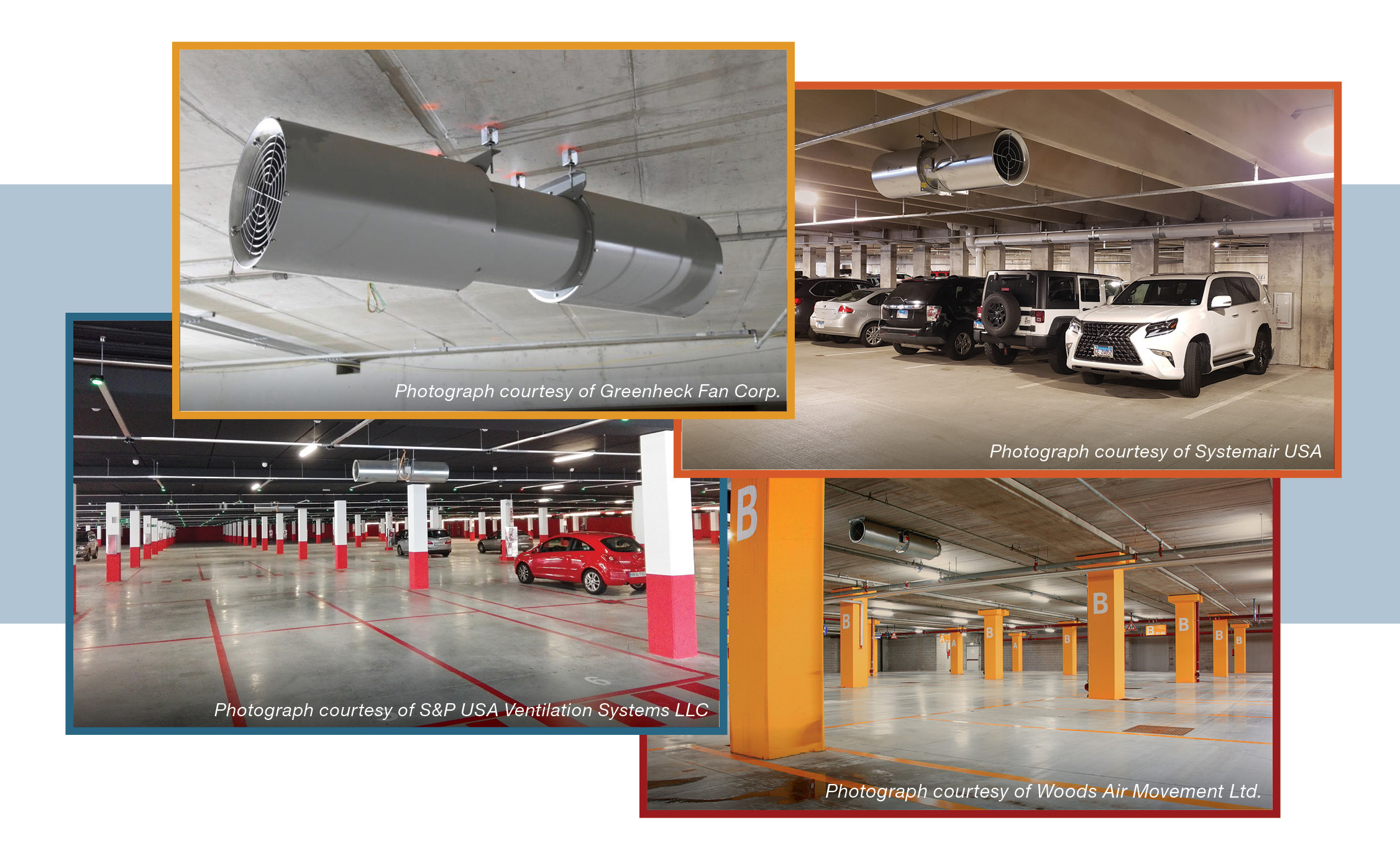 Jet fans are small and can be attached directly to or suspended from a ceiling. A jet fan moves air at both ceiling level and at lower levels by means of entrainment.

Figure 2 illustrates 4,500-cfm (2 m3/s) flow through a jet fan. The red jet is the air leaving the jet fan. The black arrows illustrate what is called the “multiplier effect,” whereby the jet entrains air in its wake, resulting in up to 20,000 cfm (9 m3/s) of flow moving downstream of the jet fan. It is this multiplier effect that makes jet fans so effective at moving air around a parking garage. Only about one-quarter of the air that needs to be moved actually needs to pass through the jet fan itself. The remainder is motivated to move by the jet-fan jet.

Figure 2 is from a computational-fluid-dynamics (CFD) simulation. CFD is the process of modeling a physical phenomenon involving fluid flow mathematically and solving it numerically. In practice, CFD may be thought of as building and testing jet fans in a virtual parking garage, as opposed to a real one.

Over the last 10 years, CFD code development has focused on mesh optimization and the user interface, a process that has moved CFD out of the research laboratory and into the engineering office, where it remains an advanced, but nevertheless routinely used, engineering tool.

Figures 3 and 4 are from a CFD simulation used to assess the ability of strategically placed jet fans to move air from supply-air points through a parking garage to extractor fans, with the airflow splitting as it travels around the central space. In Figure 3, we are looking down at a plane halfway between the parking garage’s floor and ceiling, with blue representing low velocity and red representing high velocity. These results were processed into average velocities from the supply-air points toward the air-extraction point to show they were above 10 fps (3 m/s).

Measuring air velocity in a parking garage is impractical, as airflow is driven by the heat released by fire. Thus, a parking garage literally would have to be set ablaze for air to move as it would in the event of a fire. Strengthening the case for CFD simulation is that, as parking garages get larger, with multi-layer interaction between levels, air movement becomes progressively harder to predict using any other method.

FIGURE 3. CFD simulation of the flow induced by 11 separate jet fans in a parking garage. The jet out of each fan is colored red, with slower-moving air colored blue. This was the final simulation in a series of simulations intended to refine the design until it met code requirements for both normal and emergency operating modes. Image courtesy of Woods Air Movement Ltd. 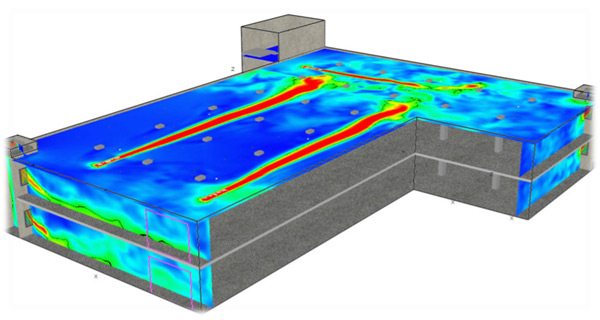 The design of parking-garage ventilation systems is facilitated by the use of CFD. CFD simulations are a means of predicting airflow in a parking garage and determining whether a system meets both normal and emergency operating-mode requirements.

Geoff Sheard, DSc, is founder and president of AGS Consulting LLC, an engineering company offering a wide range of services to the commercial and industrial fan community. With more than 40 years’ experience in the development of rotating equipment, the last 20 focused exclusively on high-efficiency fans, he is the author of a series of books on the use of computational methods for fan design. He is a past president (2013-2014) and chairman of the board of AMCA International and a member of the AMCA International-administered U.S. Technical Advisory Group (TAG) to International Organization for Standardization (ISO) Technical Committee (TC) 117, Fans.