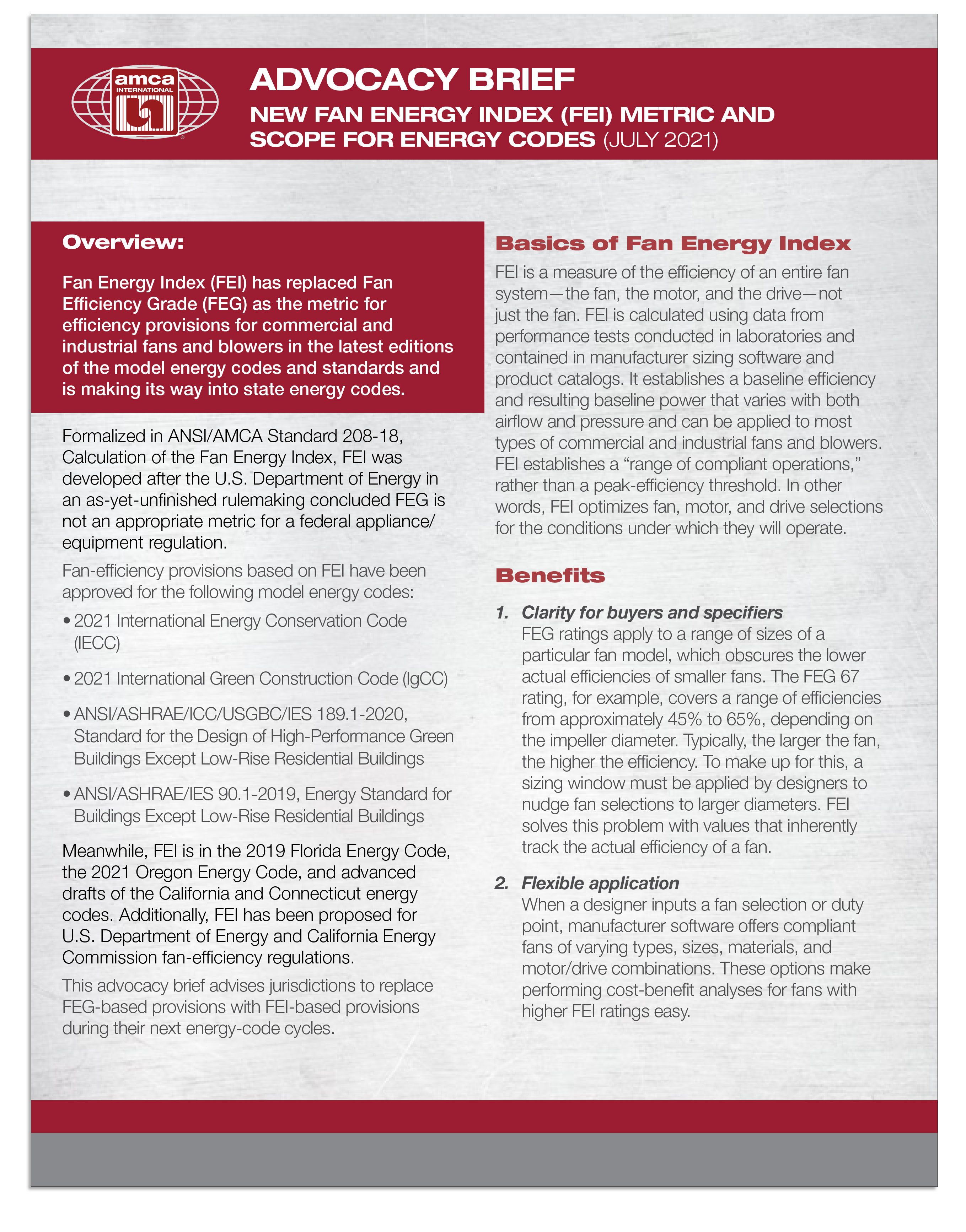 AMCA International supports the transition to FEI (Fan Energy Index) from FEG (Fan Efficiency Grade) in U.S. codes, standards, and regulations. U.S. model energy codes and standards have made the transition in their latest editions, so FEI will be implemented as they are adopted. For jurisdictions adopting earlier editions of model codes, AMCA asks them to replace FEG provisions with FEI provisions as Florida did with its 2019 energy code. AMCA, with permission from ASHRAE and ICC, has prepared templates for making these changes. In addition, AMCA recommends that AMCA-certified FEI ratings be specified where possible. An AMCA Advocacy Brief discusses why and how to transition from FEG to FEI. Templates for making changes to energy codes based on ASHRAE 90.1 and IECC are provided below. AMCA-certified FEI ratings can be found at www.amca.org/find-FEI.

Please contact Michael Ivanovich at mivanovich@amca.org with any questions.

ANSI/ASHRAE/IES 90.1: The 2019 version of ASHRAE 90.1, Energy Standard for Buildings Except Low-Rise Residential Buildings, contains FEI language. A list of fans that are exceptions to the FEI requirements is included. The standard can be purchased on the ASHRAE Bookstore website here.

International Energy Conservation Code (IECC): The 2021 IECC, posted on the ICC website here, also contains FEI language. A list of fans that are exceptions to the FEI requirements is included in the language. Unlike the ASHRAE 90.1-2019 FEI language, the 2021 IECC requires that FEI ratings be certified by an approved third-party laboratory.

In 2011, the U.S. Department of Energy began a rulemaking process with the intent to develop test/labeling and energy-efficiency standards for commercial and industrial fans, an initiative that was put on hold in 2017. Useful materials from the initiative are the Appliance Standards and Rulemaking Federal Advisory Committee Term Sheet, which documents consensus-voted recommendations toward the development of regulations, and the third Notice of Data Availability, a provisional analysis of economic impacts and energy savings that could result from promulgating a regulatory energy conservation standard for commercial and industrial fans and blowers.

California Title 20 is part of the Appliance Efficiency Regulation and California Code of Regulations. It is administered by the California Energy Commission (CEC). The CEC initiated a Title 20 rulemaking for commercial and industrial fans and blowers in 2017. The public docket has all documents published by the CEC relating to the regulation, and all comments, proposals, and supplemental materials posted by stakeholders.

AMCA encourages state energy code departments to adopt FEI language as found in ASHRAE 90.1-2019 and the 2021 IECC. When states seek to adopt earlier versions of ASHRAE 90.1 or the IECC that contain FEG language, AMCA advocates for replacement of the FEG language with the FEI language as found in these newest editions. An example of this is the 2020 Florida Building Code, which in adopting the 2018 IECC, adopted the FEI provision in the 2021 IECC in place of the FEG provision in the 2018 IECC.

To find manufacturers with fans which have been AMCA FEI certified through the Certified Rating Program, click the banner below:

Search AMCA member products which have been certified for FEI.

Webinar conducted in conjunction with ASHRAE